Posted on August 8, 2018 by mrpatvincent 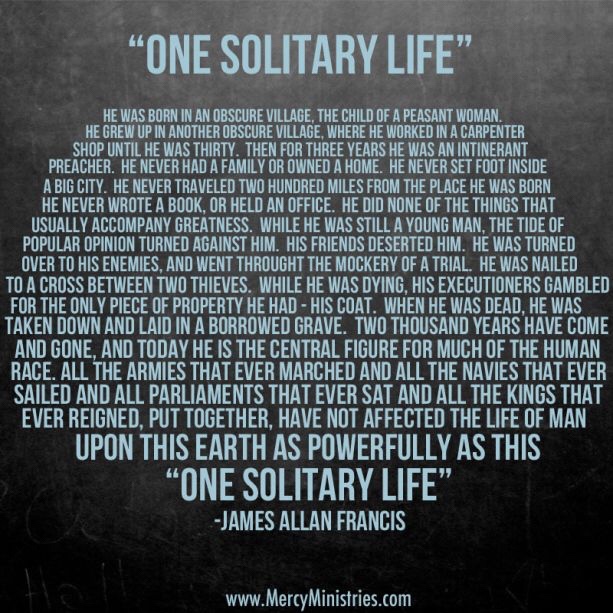 “A child is born in an obscure village. He is brought up in another obscure village. He works in a carpenter shop until he is thirty, and then for three brief years is an itinerant preacher, proclaiming a message and living a life. He never writes a book. He never holds an office. He never raises an army. He never has a family of his own. He never owns a home. He never goes to college. He never travels two hundred miles from the place where he was born. He gathers a little group of friends about him and teaches them his way of life. While still a young man, the tide of popular feeling turns against him. One denies him; another betrays him. He is turned over to his enemies. He goes through the mockery of a trial; he is nailed to a cross between two thieves, and when dead is laid in a borrowed grave by the kindness of a friend.

Those are the facts of his human life. He rises from the dead. Today we look back across nineteen hundred years [now twenty!] and ask, What kind of trail has he left across the centuries? When we try to sum up his influence, all the armies that ever marched, all the parliaments that ever sat, all the kings that ever reigned are absolutely picayune in their influence on mankind compared with that of this one solitary life.”

Commit to the Lord here and now.