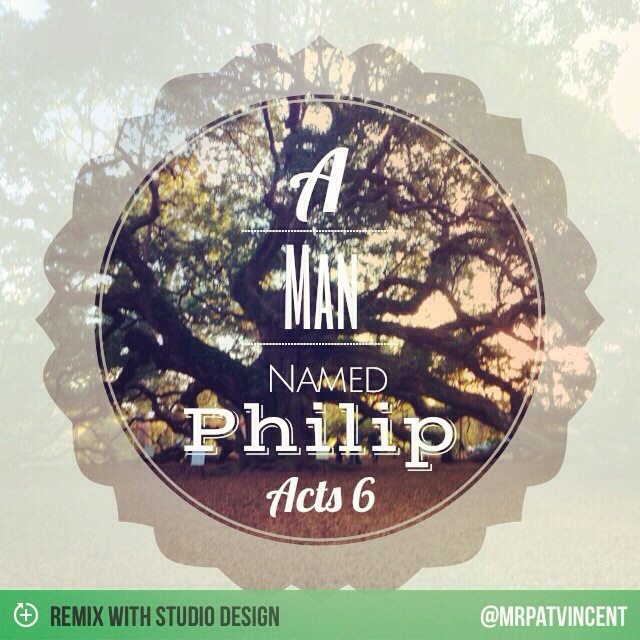 There was a man named Philip… not the Apostle Philip, but another Philip,… who treated an audience of thousands and an audience of one with the same zeal. A man who did not discriminate between race and class. A man who was miraculously transported across the land. He was a man who, no doubt, inspired countless missionaries with his wisdom and compassion.

In Acts 6, the early church has just gotten started. Now, you would assume that it was perfect, right? However, it had problems just like today’s churches do. The conflict in this instance was that certain widows were being overlooked with the food distribution.

Here is where it gets really interesting!

The early leaders were commissioned with spreading the Gospel outside of Jerusalem. Philip is spreading it in Samaria. Why is that significant? Well, the Jewish people held the Samaritans as “half-breeds” and therefore hated them. Philip’s example demonstrates that the Good News is for everyone, regardless of class or color. Hatred, bigotry, and ignorance have no place in spreading the Good News of our Savior!

Philip is approached by an angel and told to go to Ethiopia. On that road he runs into an Ethiopian eunuch who is reading the Book of Isaiah. The eunuch was having a hard time deciphering it. Starting there, Philip begins preaching the about Jesus.

Philip baptizes him and is “taken away.” He then “appears” many miles away. Did he fly? Was he teleported? Who knows, but anything is possible! There’s nothing that the Spirit of the Lord cannot accomplish!

So what can we glean from the life of Philip? What can’t we?!

• He was full of the Spirit and wisdom.

• He did not discriminate who could and could not hear the Gospel.

• He also could share his witness with a whole nation or a single person because both are equally important.

What a great example. Take some time to meditate on Philip and his admirable characteristics. How can you apply these to your walk?

1 Response to A Man Named Philip